Is Humming the Secret to Better Health? (and a Possible COVID Treatment?)

What comes to mind when you think of the biological drivers behind better health?

In a world of thousands upon thousands of health and wellness influencers, it’s not hard to get caught up on these admittedly important hormones, chemicals, and neurotransmitters.

But what if I were to tell you that there’s one simple, overlooked little molecule that’s capable of boosting your immune system, improving libido, and increasing physical performance? In fact, this very molecule is being tested in clinical trials as a potential treatment for COVID-19 (bonus points, it was named “Science” journal’s “Molecule of the Year”).

Best of all, you don’t need to take supplements, change your diet, or adopt a new exercise routine to increase the amount of this compound that your body produces by up to 15x.

The super compound I’m talking about is nitric oxide.

It’s one of the most important compounds in the body, which is why it’s a shame that most people are producing less than 20% of the nitric oxide they could be with a few simple breathing techniques and habits (spoiler alert: humming).

But let’s start at the beginning – what exactly is nitric oxide and how can it supercharge your health?

Benefits of Nitric Oxide (+ Why You Probably Don’t Produce Enough)

Nitric oxide is a compound that is primarily produced in the sinuses and acts as a vasodilator.

Basically, nitric oxide helps to open up the body’s blood vessels. This decreases blood pressure and increases breathing efficiency by making it easier for red blood cells to deliver oxygen throughout the body. 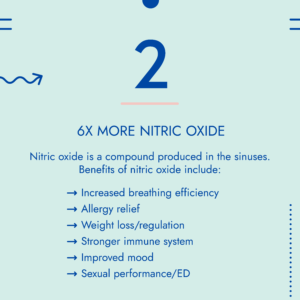 It’s a huge part of the reason nose breathing is up to 18% more efficient than mouth breathing.1

Breathing is something we do all day, every day, so increased efficiency is a pretty big win. But this is really just the tip of the iceberg when it comes to the benefits of nitric oxide:

Most interestingly, nitric oxide is a proven way to increase male sexual performance or deal with erectile dysfunction. It opens up blood pathways throughout the body, including, well, “down there”. Most erectile dysfunction drugs work in the same way.

Lastly, I feel like I’d be doing a disservice if I didn’t mention that nitric oxide may be an effective antiviral for treating COVID. While the jury is still out, and I don’t at all want to imply that humming is going to prevent you from getting COVID, nitric oxide does have proven antiviral, antibacterial, and anti-fungal properties. There is still more research to be done, but unlike other potential remedies, there are practically no downsides to naturally increasing your nitric oxide levels.

In a recent survey, 61% of adults identified as mouth breathers. That’s the majority of people.

If you’re new to the world of conscious breathing, you’re probably wondering, “what’s so bad about mouth breathing?”

Simply put, our body’s are built for nose breathing.

The sinuses contain a vast network of tubes, tissues, and turbinates that filter, warm and pressurize the air before it reaches the lungs. Mucus acts as the first layer of defense against outside invaders, and a host of chemicals and compounds are released in the sinuses to make breathing more efficient – nitric oxide among them. 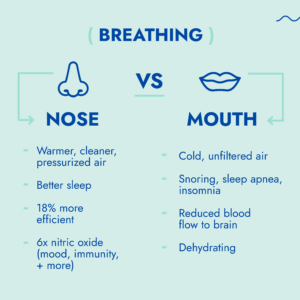 Mouth breathing, on the other hand, involves no such filtering, warming, or pressurizing. The air that travels to the lungs is cold and unfiltered.

There are some other huge downsides to mouth breathing:

Related: 3 Ways to Decrease Stress with the Breath (with animations)

Mouth breathing is an emergency response that the body should only use in extreme circumstances. No other mammal habitually mouth-breathes unless they’re in dire circumstances, and the same should be true for humans.

I won’t go into the full science behind nose versus mouth breathing, for that you can my in-depth post on the benefits of nose breathing, but for now we need to understand one simple thing:

That’s right, this compound that is so important for your physical and mental health is hardly produced when we breathe out of the mouth.

The reason nose breathing is crucial for nitric oxide production is simple biology – nitric oxide is primary produced in the sinuses.

More specifically, nitric oxide production is triggered by the stimulation of the nasal passages. As air is inhaled and exhaled through the nose, it passes through the sinuses and “tells” the sinuses to produce more nitric oxide. On the next inhale, the air “grabs” the nitric oxide and brings it down to the lungs, where it can enter the blood stream and work its magic on the entire body.

Simply breathing out of your nose can boost nitric oxide production by up to 6x, which is a huge part of the reason why nose breathing is up to 18% more efficient than mouth breathing.

But there’s another simple tip that can boost your production by up to 15x.

Humming: Boost Your Nitric Oxide Production by Up to 15x

Humming has been used for thousands of years in ancient practice as a way to improve mental and physical health.

Now, while I’m sure the Yogis didn’t know why humming worked, new studies can confirm the reasoning behind it.

Remember how air passing through the sinuses triggered the production of nitric oxide?

Well, the vibration caused by humming takes this stimulation to another level.

Again, that’s a 15x increase over silent nose breathing – if you’re coming from the world of mouth breathing the jump will be even bigger.

Both of these studies were conducted on individuals with sinus issues – basically, chronic congestion or allergies.

By simply humming anywhere from 60 to 120 breaths (ideally several times a day), the patients were able to clear their chronic sinusitis within a matter of days. These were individuals who struggled with these issues for years and had tried just about everything who woke up with clear sinuses after a night of humming.

Still, you don’t have to have chronic sinus issues to reap the benefits of increased nitric oxide production.

Whether you want to decrease inflammation, improve your mood, or just increase performance, nitric oxide is a crucial compound for both your mental and physical health.

How to Hum Your Way To Better Health

Alright, so before you start freaking out your roommates or significant other by humming all the time, let’s clear a few things up – first, in order to reap the benefits of humming and increase your nitric oxide levels, you have to breathe through your nose.

Keep your mouth closed for this entire exercise, even if your nose is relatively plugged up. The increased production of nitric oxide will help clear your nose and prevent congestion in the future.

If you are extremely congested, I recommend using this 3-minute nose unblocking exercise and then returning to this exercise.

Alright, so with a closed mouth, inhale regularly, and then on the exhale, simply hum as loud as you can, like a bee or an insect.

I’ve included a video of myself doing this here:

Draw out the exhale as long as you possibly can before inhaling again – this won’t boost your nitric oxide production, but extending the exhale is a proven way to activate your rest-and-digest mode and reduce stress. 4

Repeat this process as many times as you can. In the study, the participants did 60 to 120 breaths several times throughout the day, but still, doing 1 or 2 humming breaths is better than doing none.

Just fit them in whenever you can and start to make it a habit.

PS: If you want reminders to do this exercise and other guided breathing techniques to improve your health, you can download the One Deep Breath app.

Putting it all together: Why you should incorporate humming into your daily routine

So those humming monks and meditators were so crazy after all, huh? It’s no wonder that humming traditions have been passed down for centuries, and still practiced today.

In this article, we covered a few important topics:

Humming is really one of the simplest, easiest things you can do to improve your health. Just do it when you can, and you’ll start noticing a difference in your health. I’ve been humming daily for a few months now (3-5 minutes a day) and my seasonal allergies have hardly been a problem.

Humming hasn’t made me a superhuman, but it’s certainly helped me feel less congested, more energized, and healthier.

Have you tried humming before? Let me know in the comments below.