3 Simple Ways to Decrease Stress With the Breath (+ Animations)

On a biological level, stress is supposed to be outside of our control. The sympathetic nervous system, our body’s fight-or-flight mode, is part of the autonomic nervous system. It’s automatic. Involuntary. Self-regulating.

And for the most part, this sentiment is true.

But we can choose how we breathe.

And by altering the breath, we can do the (supposedly) impossible – we can override our default fight-or-flight response and stay calm and relaxed when we need it most.

Breathing is one of the few tools we have that can actively affect both our sympathetic (fight-or-flight) and parasympathetic (rest-and-digest) nervous system.

Sure, heavy, rapid breathing is a side-effect of being in fight-or-flight mode, but the beautiful thing about conscious breathing is that you can choose to alter the breath and signal to your body that it’s time to relax.

Here are three, clinically-proven ways you can take control of your nervous system and leverage your own biology to stay calm.  No pseudo-scientific mantras or visualizations necessary.

You’ve probably heard the old adage before that you should “breathe out of the stomach, not the chest”.

It’s something my grandma always used to tell me, and while she doesn’t know the science behind it, the message is spot on.

The lungs are lined with millions upon millions of nerve endings that connect to either the parasympathetic (rest-and-digest/relax) or sympathetic (fight-or-flight) nervous system.

By and large, the endings at the top of the lungs are connected to the sympathetic nervous system – they tell our body to prepare for threats and to divert resources away from digestion and recovery.1

It doesn’t take a scientist to see this in action – next time you’re stressed out, check to see if your shoulders and chest are rising up and down with each breath. 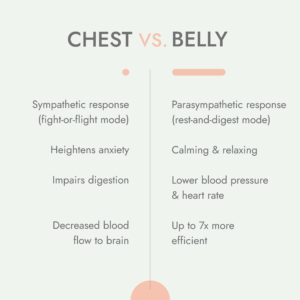 Belly breathing, on the other hand, has the opposite effect.

Breathing out of the stomach activates the parasympathetic nervous system, the body’s rest-and-digest/relaxation mode.

When you breathe out of the stomach, you’re engaging a muscle called the “diaphragm”, which is supposed to be the main muscle used in breathing.

With each expansion and contraction, the diaphragm stimulates the vagus nerve, which is one of the single best pathways to the body’s parasympathetic, rest-and-relaxation mode.

Unfortunately, James Nestor, in his book, Breath, describes how many adults use as little as 10% of their diaphragm.  Most of us are accustomed to years of chest breathing, and our diaphragms have become weak.

It’s no surprise that rates of chronic stress are so high.

Just like any muscle, the diaphragm needs to be trained, and this exercise help in no time…

Follow the animation below while keeping your chest and shoulders level the entire time.  They shouldn’t rise or fall at all.

Repeat this exercise several times a day to make belly breathing a habit in no time.

The average person takes a staggering 18 breaths per minute.2

“What’s so bad about breathing a lot? Isn’t more air a good thing?”

While I won’t go into full depth here (for that you can check out my full article on over-breathing and anxiety), it’s important to note that more breathing does not mean better breathing.

In fact, it’s oftentimes the opposite.

To understand this, we’re going to have to learn some basic science – nothing too hard, so stick with me.

Alright, so when we breathe, air travels to the lungs, where the oxygen is picked up by red blood cells.  These red blood cells deliver oxygen to all the cells that need it throughout the body. 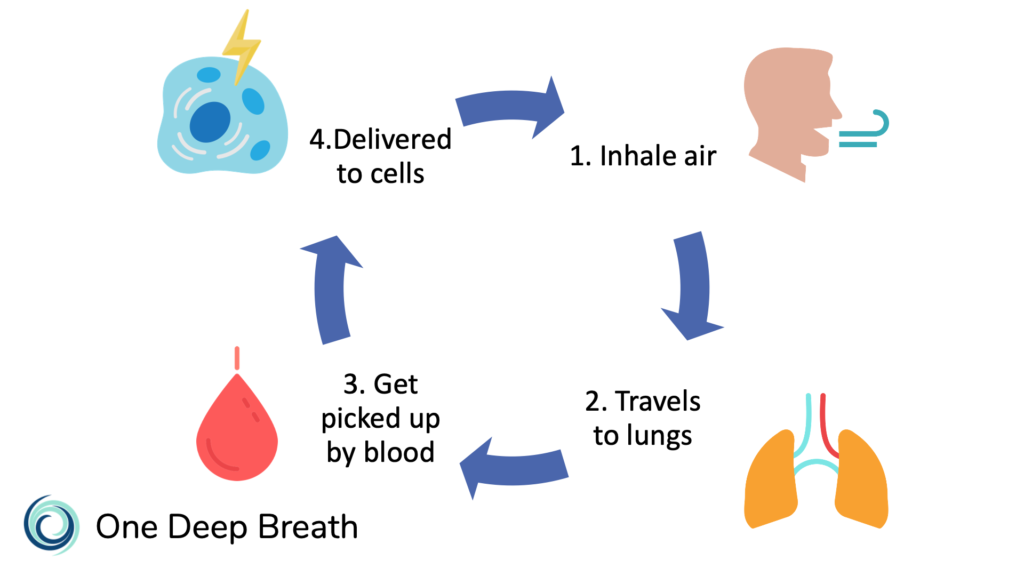 While you’d certainly think so, it’s actually the opposite.

Carbon dioxide, not oxygen in the bloodstream, is what allows the body to absorb more oxygen.

“What our bodies really want , what they require to function properly, isn’t faster or deeper breaths. It’s not more air. What we need is more carbon dioxide.”

This phenomenon is what’s known as the Bohr Effect, and it’s one of the most misunderstood biological mechanisms out there.

Now I know this probably seems crazy, but as James Nestor explains, “there’s nothing controversial about this process of respiration and the role of carbon dioxide in gas exchange . It’s basic biochemistry”.

This is a tricky point, so I’ll use an example to illustrate it:

You’re working out, doing some bicep curls. You start to feel a burning sensation in your bicep. You keep going, and the sensation gets a bit stronger, but then, all of a sudden, a few reps in, after you’ve “warmed up”, you hit your stride and can pump out 3 or 4 more reps.

This is the Bohr effect (and a few other biological mechanisms, to be fair) at play. Your biceps produced carbon dioxide, which entered the bloodstream and acted as a signal for oxygen to get dropped off.

Without carbon dioxide, your body has no idea where to deliver oxygen, and oftentimes cells will hold on to old oxygen instead of letting go and grabbing new oxygen.

That’s why it’s no surprise that the human body almost always has enough oxygen – in fact, 75% of oxygen is just exhaled out anyway.

So, back to the point at hand – why slow down the breath for stress?

Why you Should Breathe Less for Stress

Because it allows your body to actually increase oxygenation.

Slowing down the breath tells your body, “Hey! It’s okay to let go of all that old oxygen and pick up fresh O2!”

In his book, Breath, James Nestor describes the physiological effects of slowing down the breath to 5.5 per minute (3 times slower than the average American):

Blood flow to the brain increased and the systems in the body entered a state of coherence, when the functions of heart, circulation, and nervous system are coordinated to peak efficiency”

If you’re still not sold on the science – let me ask you this. What happens to the breath when you become stressed out, panicked, or anxious?

For most people, it speeds up. You begin to hyperventilate.

Over-breathing is a stress response, used to prime the body for threats. It’s great for feeling alert and focused (which is why the energizing patterns on the One Deep Breath app focus on larger inhales), but it’s not so great for stress and anxiety.

The key is to slow the breath down.

We’ve designed several patterns on the One Deep Breath app for this specific purpose.

For learning to slow down the breath, I recommend the Optimal Everyday pattern, which was tested by researchers and led to lower blood pressure, decreased heart rate, and increased parasympathetic nervous system (rest-and-relax mode) activity.

For best results, keep the shoulders and chest completely level and breathe through the nose.

3. Exhale Fully (and Then Some)

Alright, so you’ve probably caught on to a similar pattern here:

That’s why it’s not surprising to hear that not exhaling fully is another big cause (or symptom) of stress.

Not exhaling fully leads to the same effect as over-breathing – too much oxygen in the bloodstream and not enough carbon dioxide.

Simply by elongating the exhale, you can decrease heart rate and activate the parasympathetic nervous system.

Plus, squeezing out the exhale is a proven method to increase diaphragmatic activity, which in turn decreases your body’s stress response.

There’s nothing too fancy here – fully exhaling increases blood oxygenation, triggers a parasympathetic response, and engages the diaphragm, all of which help with stress.

So, next time you feel stressed out, don’t take a big inhale, take a full exhale.

We built the Endurance pattern based on decades of experience from US Olympic Swiming Coaches who train their athletes to have strong diaphragms and full exhales.

On the exhale, really contract the stomach inwards.  On the pause after the exhale, SQUEEZE the belly as much as you can.

Alright, so I know “hold the breath” seems like pretty counterintuitive advice, but we need to remember that most people who are stressed out are breathing too much and too rapidly.

A breath-hold is a surefire way to slow down the breath and allow yourself to regain control.

Try incorporating a small, 5-15 second breath-holds after inhales.  It’s a great way to take yourself out of fight-or-flight mode and activate your parasympathetic nervous system.

Again, if you’re part of the small minority of people who breathe too little when you’re stressed out (Dr. Patrick McKeown in Oxygen Advantage estimates it to be around 10% of people) then you’ll want to avoid breath holds.

For the rest of us, I recommend using a pattern like the 4-7-8 Unwind, which was pioneered by Dr. Andrew Weil as a “tranquilizer to the sympathetic [fight-or-flight] nervous system”.

It involves a 4 second inhale, a 7-second breath-hold, and an 8 second exhale.

Remember: use the belly for best results!

Putting it all together

There are 3 key components to breathing for stress:

Using these simple, easy techniques, you can overcome your body’s natural stress response and stay calm, relaxed, and focused when you need it most.

Stress can be a beautiful thing when we’re using it to stay safe or perform in athletics.

Unfortunately, most of us have an unhealthy relationship with stress, allowing it to take over our lives and creep into just about every facet.

PS: Curious about nose breathing and stress?  Check out our full article.